Main
>
Learn
>
What is Bitcoin, and how does it elevate traditional finance to the 21st century? 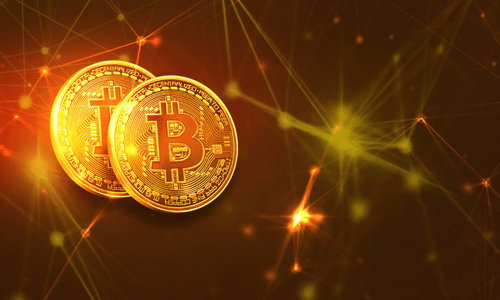 Like Venmo and PayPal, the conventional financial system requires authorization to transfer money and relies on preexisting debit/credit accounts. By contrast, Bitcoin is decentralized, allowing anybody globally to send Bitcoin to anyone else.

Bitcoin is a digital currency with a limited number in circulation (21 million). You do have the ability to transfer Bitcoin and don't need to purchase a whole one.

Like a bank's ledger or record of clients' cash, the blockchain keeps track of every Bitcoin transaction. On the other hand, a bank's register is kept in a single location in the bank's building. Anyone may join the network, and it's not controlled by any corporation, government, or third party.

Depending on your objectives, Bitcoin may serve as:

- a comparable store of value such as gold

- a means to transmit money globally

Since Bitcoin was created, hundreds of new cryptocurrencies have been made, but Bitcoin's market capitalization and trading volume (abbreviated as BTC) are still the largest.

The Mystery Behind Bitcoin - Who Created It?

To understand Bitcoin deeper, let's go back to its origins. Bitcoin's inventor remains a mystery even after a decade of investigation by journalists and crypto community members. As of late 2008, Satoshi Nakamoto, a pseudonymous individual or group, issued a white paper on the idea of Bitcoin online. In cryptography and computer science, this paper wasn't the first to propose the concept of digital money, and the article referred to earlier ideas.

Moreover, it was an excellent way of creating confidence between various online entities, even if those entities were concealed behind pseudonyms (like Bitcoin's founder) or situated on opposite sides of the earth (on separate planets). Nakamoto developed the Bitcoin private key and the blockchain ledger simultaneously.

You have a private key that unlocks a virtual vault where your purchase is stored. The blockchain is a virtual ledger that holds each private key.

How does Bitcoin work?

A person or organization has no control over Bitcoin, unlike credit card networks like Visa and payment processors like Paypal. Anyone with an internet connection may use Bitcoin, the world's first open payment network.

To be more exact, here's how it all goes down:

Computers, known as "mining rigs," are used to verify and record new transactions in cryptocurrency. Anyone who wanted to become involved in mining in the early days could use an ordinary desktop computer. It is common for large organizations to combine resources to purchase computer systems that are now considered essential.

But how does the network encourage miners to contribute? Whenever a math problem is solved, the Bitcoin network conducts a random lottery in which all mining rigs compete for the prize. Every 10 minutes, valid transactions are added to the Bitcoin ledger. Each lottery winner received 12.5 Bitcoins.

A single Bitcoin was once worthless, and it was valued at around $7,500 at the end of 2019. In recent years, the possibility of obtaining a fraction of a Bitcoin has become one of the essential characteristics of Bitcoin. A satoshi is the lowest unit of Bitcoin, and it may be split into eight decimal places (100 millionths of a Bitcoin).

For this reason, it was intended by Nakamoto that the total number of Bitcoins would never exceed 21 million. Since only around 3 million Bitcoins remain mined, it will take longer, and the final block should be drilled in 2140.

The total number of Bitcoins in circulation is limited to 21 million, and only 21 million Bitcoins will ever be created. But several different qualities make Bitcoin so valuable:

How to Use Bitcoin

The way to use Bitcoin is to transmit and receive payments electronically. You have total control and privacy over your blockchain transactions, just like you do with other cryptocurrencies.

Since most companies do not immediately accept Bitcoin, you will need a "digital" or "Bitcoin" wallet to hold your balance. Bitcoin wallets are available in several formats, including mobile applications, desktop or online software, and hardware (such as a USB stick) that allows you to transfer and receive funds via alphanumeric or QR codes. It is a great advantage to trade on platforms that will enable wallets, such as INX, where you can set up the digital wallet of your preference.

Instead of entering card information, you will submit the payment amount and the vendor's public key (such as an email address) through a wallet app. When using smartphones or tablets in person, a QR code will appear to expedite the process; when scanned, your wallet program will immediately enter the necessary data. INX, for example, is a leading platform that operates a meticulous process.

How to get Bitcoin

To take full advantage of the potential that bitcoin presents to each of us, we should all have the ability to get Bitcoin and trade it on a safe and regulated platform. By using the INX platform, you may list and trade cryptocurrencies while confident that all transactions are done compliant within all applicable regulations while safeguarding your privacy and security with industry-standard security measures.

3 Easy Steps to Register for an Account at INX (crypto.inx.co).

2. Fund your account/wallet to invest with no minimum cost.

3. Place your order for cryptocurrencies

What is Bitcoin mining?

How difficult is it to make a Bitcoin payment?

Bitcoin transactions are more straightforward than debit or credit card transactions, and they may be accepted without opening a bank or merchant account.

Bitcoin is a digital alternative to fiat money and is decentralized via the blockchain, as transactions are made person-to-person. But yes, bitcoin is technically real money, and you can use it to buy things, but it’s not widely accepted yet.

The Limited Liberties of Economic Freedom

What is Ethereum (ETH), and how does it work?
Buy Crypto

Thank you for joining and welcome to INX.
Oops! Something went wrong while submitting the form.
“INX” refers to The INX Digital Company, Inc, a technology company headquartered in Gibraltar and its affiliates.
THIS WEBSITE IS OWNED AND OPERATED BY INX. INX IS NOT A BROKER-DEALER, INVESTMENT ADVISER, OR FINANCIAL ADVISOR. INX DOES NOT GIVE INVESTMENT OR LEGAL ADVICE, ENDORSEMENTS, ANALYSIS, OR RECOMMENDATIONS WITH RESPECT TO ANY SECURITIES OR OTHER DIGITAL ASSETS. NOTHING ON THIS WEBSITE SHALL CONSTITUTE OR BE CONSTRUED AS AN OFFERING OF SECURITIES OR AS INVESTMENT ADVICE OR INVESTMENT RECOMMENDATIONS BY INX OR ITS AFFILIATES.
The INX Digital Company, Inc offers technology services to all its affiliates. Cryptocurrencies and related services are offered by INX Digital, Inc., a Delaware corporation headquartered in Gaithersburg, MD and registered with the Financial Crimes Enforcement Network and certain states as a money transmitter (NMLS 2094630). Digital securities and related services are offered by INX Securities, LLC, a broker-dealer/ATS registered with the SEC and member of FINRA/SIPC.
Securities transactions, products, and services are offered by INX Securities, LLC, member FINRA and SIPC. For information relating to INX Securities, LLC, please visit Digital Securities | BrokerCheck | Customer Relationship Summary.
INX relies on information from various sources believed to be reliable, including from customers and third parties, but cannot guarantee its accuracy or completeness. None of INX affiliated companies provide legal, tax, or investment advice.
Cryptocurrency and other digital asset holdings are speculative in nature and involve substantial risk, including the risk of complete loss. Past performance has no bearing on future performance and there can be no assurance that any cryptocurrency, token, coin, or other crypto asset will be viable, liquid, or solvent. Nothing in this or any INX communication is intended to imply that digital assets or related services are low-risk or risk-free and you should conduct your own due diligence before investing.
Login
Cryptocurrency Trading Platform